Why Do Dogs Bury Things? 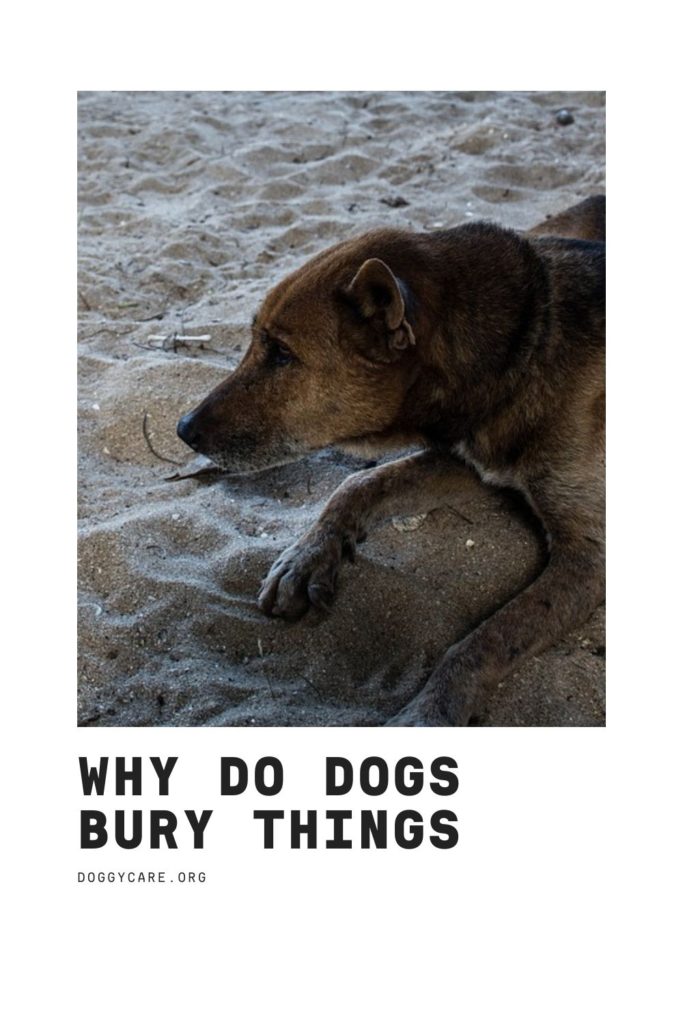 Ever sat down and watched cartoons as a child and saw an animated dog burying a bone after receiving it? It’s a common trope in shows like Tom and Jerry. It might sound like something that only comes from a Sunday morning show, but dogs burying their toys, bones, and other household objects is actually pretty common. Dogs are known to dig. They love to create holes and in the dirt and fill it with things they love. And if there is no dirt to be found, they’ll find ways to dig in their bed or the laundry basket. So why do dogs bury things?

Why Do Dogs Bury Things?

It’s All In Their History

Centuries before they were domesticated, dogs roam the world as packs and would hunt their own food. During those times, food was scarce, and every time a canine makes a kill, there were bound to be other animals who were looking for dinner as well. There were also instances of packs unable to finish their meal.

So what these dogs do was that they would bury the remaining carcasses and bones to avoid other predators from stealing their meal and maintaining its freshness for when they come back.

Obviously, domesticated dogs like the ones we have today in our homes don’t need to go out and hunt for their food like their ancestors did. Yet, we still see them engaging in the same behavior. It turns out, there are a lot of reasons as to why dogs bury things.

It’s In The Instincts

Old habits are hard to break, and that’s true for our canine companions. Digging and burying things are in their blood, so it shouldn’t be a surprise that they’ll still do it even if they are not influenced by any sort of pack. This is also true when your dog lives with other furry roommates. Dogs are naturally competitive when it comes to their territory, so they might bury their favorite toys or bone to keep other dogs from finding them.

Maybe Your Dog Has A Little Too Much Toys

We mentioned earlier that the dog’s ancestors used to bury excess meat into the earth to come back for it later, so it’s no surprise that an excess of dog toys might lead to a dog burying some extra ones in the dirt. Giving your pet toys is a nice way to show your love, but maybe try not to go overboard with it. We don’t want your dog to hide all of the toys and leave nothing out to play, do we?

Dogs are playful creatures. Sometimes when you’re busy, they just want to find ways for you to play with them. Dogs may take something you hold value to, like a TV remote or a slipper, and bury them to get you to “play” with them. It can be fun once or twice, but if it is becoming an attention-seeking habit, do your best to hide these objects from your pooch. I’m sure they’ll understand when you decide to lock them out of the bedroom for a while.

They Can Also Be Anxious

Dogs who are abandoned in kennels or grew up in puppy mills may experience anxiety when being rehoused. Digging and burying food and toys can act as a self-soothing ritual for them. They may also feel anxious about where they eat their meals, so they’ll save their food for later underground. When dealing with a dog with anxiety, it’s best to be as patient as possible with them and help them feel more comfortable with their surroundings. Usually, their anxiousness will subside once they are used to their environment.

Should I be concerned with my dog burying and hiding things?

Dogs love to bury things that they deemed important. It’s normal behavior for them to hide their favorite toy or bone somewhere where only they know where to find it. While it can be annoying when they hide the other half of your shoe, just know that your dogs just want a little bit of extra attention. Feel happy that your dogs love you very much, so much so that they will hide the things you give them because they see it as something valuable. Guess we could learn a thing or two from our canine friends.