Why Is My Dog’s Nose Wet? 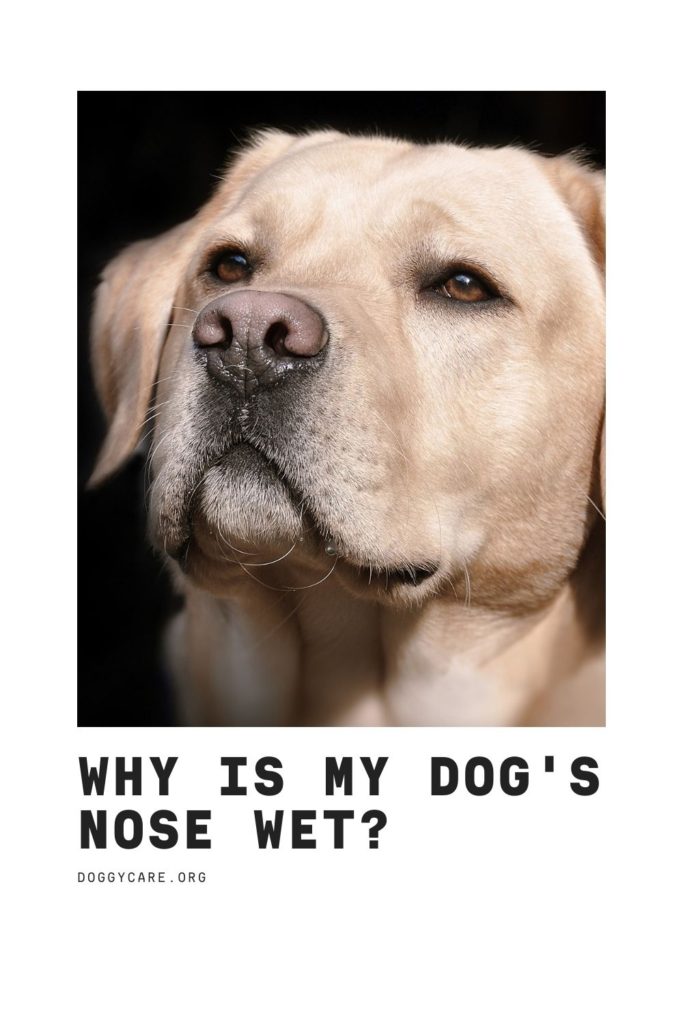 We love to snuggle with our canine pals. For some, that includes a lot of hugs and kisses. If you are one of the many people who give their dogs smoochies, you might have noticed just how wet your dog’s nose can be. It may not seem like a big deal, but we sometimes can’t help but wonder; Why are dog noses wet?

Why Is My Dog’s Nose Wet?

The Wonders of A Dog’s Nose

A dog having a wet nose is very normal and not a cause for alarm. The wet stuff on a dog’s nose is actually a mixture of saliva and mucus. A little gross when you think about it, but this thin layer of natural mucus actually serves a purpose to a dog.

Dogs rely on their nose a lot. Unlike humans, who see the world through their eyes, dogs see the world through their noses. The nose of a dog has more than 100 million sensory receptors and the part of the canine’s brain that is devoted to analyzing odor is 40 times bigger than that of a human. Dogs have a strong sense of smell, and a wet nose just so happens to be the best at picking scent particles.

Another Benefit of a Wet Nose

A wet nose is not only beneficial for helping a dog smell things. A wet nose also helps regulate a dog’s temperature. Dogs, unlike humans, do not have sweat glands, so they have to dissipate the heat through their nose and mouth. That’s why we see dogs panting. Asides from relying on their mouth, the moisture on their damp nose evaporates, thus making the dog feel cooler.

That’s Great and All, But How Does a Dog’s Nose Get Wet?

The most straightforward answer is that a dog’s nose is always wet because it licks it. Ever notice just how long your dog’s tongue is, so long that it can reach its nose? Well, dogs have to have a long tongue because that allows them to lick their nose and other extremities. A dog licks its nose for many reasons. As stated above, it licks its nose to help maintain moisture and to keep itself cool. Dogs also do it to maintain the mucus that helps them be able to smell better. Furthermore, a dog licks its nose to clean off any dirt and debris that gets stuck to it after a long day of sniffing dirt, grass, and pavements.

And while on the subject of dirt and grass, dogs can also get their noses dripping wet thanks to the environment. Whenever they go around, probing their nose into damp plants and puddles, the moisture from their environment also sticks to their nose. Just when you thought that mucus and saliva are gross on their own, now you have to deal with other wet things on their nose too.

But it’s safe to say that a dog’s wet nose is a sign that a dog is doing good.

But Can A Wet Nose Tell Us Something About a Dog’s Health?

It is a myth that a dog’s nose and its moisture level can solely tell us anything about the health status of a dog. People believe that if a dog’s nose were to ever become dry, then something is automatically wrong. But this is just an old wives’ tale. Dogs can also lose nose wetness over time as they grow older, but again, this is not a sign of something bad is happening to your dog.

The best time to start worrying and bringing your dog to the vet is when you start to notice other symptoms, like discoloration of the nose, lumps and bumps growing on the muzzle, and nosebleeds. Asides from those warning signs, if your dog starts to show symptoms of lethargy and is generally acting ill, a visit to the vet will definitely be a good call.

What does it mean when your dog’s nose isn’t wet?

A dog with a wet nose is a sign that a dog is healthy and has a good sense of smell, but don’t be disheartened if your dog’s nose is dry to the touch. As long as the dog is not feeling ill, the level of moisture in their nose does not tell the full story of their health status. Just know, if the next time you go and kiss your dog and you feel something wet, that’s just the saliva, mucus, and other weird stuff that the dog has been smelling, kissing you back.